There is a better way of desuperheating – the TEC artec way
It is a well-known fact since years by the Combined Cycle Community that Desuperheaters are the leading cause of piping failures and temperature control issues in Combined Cycle Power Plants (CCP) - in particular in HRSGs - and to a lesser degree also in Turbine Bypass applications. Desuperheaters - resp. Spray Nozzle Designs - which have originally not been designed to be used for interstage or final stage attemperation, are frequently the root cause. In fact Desuperheaters became one of the main reasons for piping failures in CCPs in the last few years.

But not only the piping system can get damaged, it also occurred that broken-off parts from final stage DSHs travelled all the way to the HP Turbine inlet and caused major damages and a shutdown of the plant.
Poor Spraywater Atomization or water puddles in the pipeline can be the reason for water carryover into the steam turbine and result in severe erosion of the HP turbine blades. 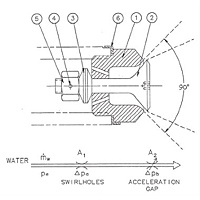 At the “other end” of the power plant steam cycle we can find one more challenge for DSHs. There the LP steam needs to be desuperheated sufficiently before entering the condenser. In today’s plants it is not uncommon that the required cooling water portion makes up for 25…30% of the arriving steam mass flow. The Desuperheater Industry realized that a large number of conventional fix opening spray nozzles would be required to handle that challenge. Many probe-style Desuperheaters would be necessary to pass the required cooling water. However, they obstruct the steam flow path and risk to break off in those typically large pipe diameters with relatively high flow velocities and turbulence, vortex shedding and vibrations, as we know from a number of reports from the field. At that moment the long known spring-loaded variable opening nozzle design came suddenly into fashion again, the so called “OP Nozzle”. This is an effort to move away from broken-off heavy nozzle heads and additional damages downstream. Only, this nozzle was originally developed for a totally different purpose…., and that’s apparently what the industry forgot about.

It was designed in Switzerland in the 1980s and predominantly used for (at that time rather rare) applications where the steam pressure was low enough - and the spray water temperature high enough - so that the water risked to start to flash prematurely, before actually leaving the spray nozzle. This would have “choked” the nozzle and caused eventually some serious erosion in the outlet section which consequently lead to a poor droplet size spectrum. Further, the OP Nozzle was always intended to be used only with a relative small opening gap (= short stroke of the spring package) in order to produce a thin sheet of water leaving the nozzle rim. Opening gaps of several Millimeters result in a heavy “shower” and unsatisfactory primary atomization, resulting in likely much water along the hot pipe wall. Severe piping damage was with certainty a reason why the industry opted to use thermal liners of several meters length after the point of water injection.

Today there are OP nozzles with either helical or Belleville springs on the market. The latter is clearly a better choice (providing only top quality springs are used - often made from Inconel). In case of a broken helical spring the nozzle would likely be going more or less fully open and gushing into the pipe.

TEC artec replaced such systems over the years, and as a consequence decided to develop a novel desuperheater (TECtemp HT R) which was not only Worldwide unique, but addressed the inherent shortcomings of conventional probe style DSHs as well as OP Nozzle ring-style arrangements. The water control part which directs resp. controls the water mass flow individually to each spray nozzle (as many as 40 pcs per DSH) is installed completely outside of the heat affected zone. There are no moving parts, gaskets or springs in the actual DSH “head” exposed to the highly superheated steam. The turn down of this arrangement is max. 2’500:1.
Evaporation rates of the TECtemp HT R are typically 95% after a short distance and the temperature distribution across the pipe section is very uniform. The way the nozzles are arranged water should not be sprayed to the pipe wall. This has repeatedly been proven by CFD calculations and actual measurements.
There are no leaking nozzles due to jammed-in debris as it can happen in the OP Nozzle opening gap, and no springs at all which eventually can soften or break and cause the nozzles to open up more than required (which results in water-overspray to the pipe wall, and in turn may prompt the temperature sensor to ask for even more water…a vicious circle). This design can be applied up to 750C (PN25 - PN400) and was especially developed for supercritical steam plants and gas turbine outlets. It has proven its viability in many new plants and also replaced numbers of existing “conventional” DSH installations which failed to control the temperature properly, causing much damage and inefficiencies.